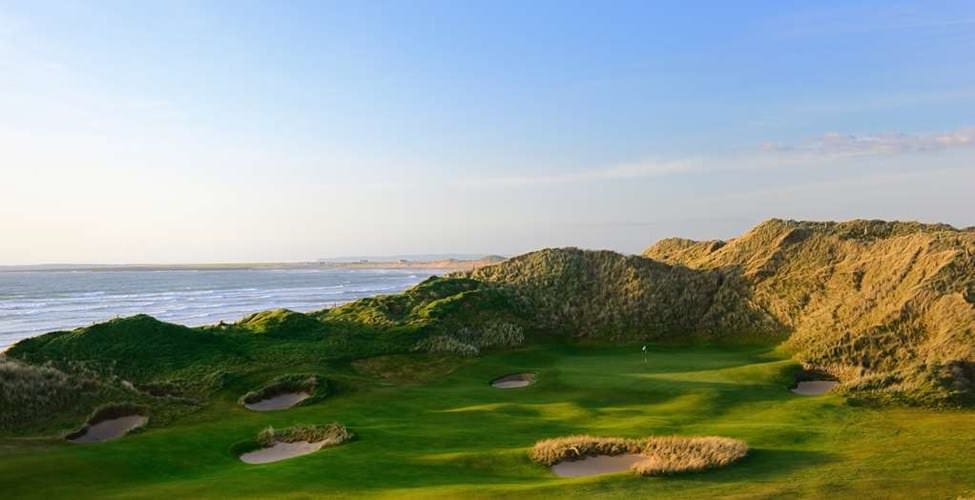 Golf is one of those things in life that has a very clear dividing line, people either love it or they hate it. No matter your preference you have to admire the persistence that true golfers apply when playing the game they love. They’ll play in the pouring rain, against strong winds, even in the middle of a scorching heat wave and will travel thousands of miles in search of that perfect course and perfect game. In honor of the true golfers preparing to compete in the 148th annual British Open this weekend, we wanted to put together a list of (difficult!) iconic golf courses throughout Ireland and the UK.

Where better to start this list, than with the course that will be hosting the British Open this weekend? With two links courses, the Dunluce Links (the Championship course) and the Valley Links, the club has a total of 36 holes for golfers to try their luck at. The Dunluce Links has hosted the British Open only once before this year, way back in 1951, and was the first course to ever host the Open outside of the Island of Britain. Overlooked by the ruins of Dunluce Castle (which gave the course its name) and with views of the rugged coastline and Atlantic Ocean this iconic golf course is full of tough holes and is considered one of the best links courses in the world.

With Belfast only an hour away, we recommend staying in the city to take advantage of the world class food and drink scene that is happening now. Afterall, what better way to review your game than with a whiskey or two?! For those who prefer a modern style hotel, we love The Fitzwilliam Hotel in downtown Belfast, its newly renovated rooms are spacious, bright and very comfortable, it’s walking distance to many local restaurants and bars, AND the cast and crew of Game of Thrones often stayed their during filming of the show! If you’re looking for something a little more traditional, the amazing Culloden Estate and Spa sits atop the Holywood Hills overlooking Belfast Lough and the coastline. Originally built as a palace, Culloden Estate is full of historic charm and warm Northern Irish hospitality.

Moving south into the Republic of Ireland finds our second stop only 30 minutes West of Dublin at The K Club in Straffan. This historic property is home to two Arnold Palmer designed courses, the Smurfit Course a dramatic inland links course and the beautiful parkland course that hosted the Ryder Cup in 2006 (for the first time in Ireland) and is now named for this prestigious event. The real star here is the Ryder Cup Course which since 2006 has hosted the Irish Open and European Open several times.

While the two iconic golf courses (and two amazing clubhouses!) right on property are reason enough to stay at The K Club while in Straffan, there are many other reasons to indulge. The property itself is a historic manor house and is full of interesting quirks, artwork and hidden secrets to discover. Outside the main house, there is a world class spa, wonderful dining options, two great bars and over 500 acres to explore including manicured gardens and wild forests. Need a break from the tee box, learn falconry or archery, take a horseback ride through the fields, or spend some time in the River Liffey working on your fly fishing.

From Straffan we move west to the Northwestern coast of County Clare and an enchantingly rugged links course that was first established over 125 years ago and is often called “the St. Andrews of Ireland”, the Lahinch Old Course. Lahinch played host this year to the Irish Open, but the tournament that it is truly known for is the South of Ireland Championship, which has been played here since 1895. One quirk of the Lahinch Golf Club is the herd of goats that are allowed to run free on the property. They’ve been here so long that they’ve even been incorporated into the logo of the Club and regulars know to look for the goats when they come to play; if they’re running free you’ll have a beautiful game but if they’re crowded near the clubhouse make sure to take your umbrella because rain is on the way!

A 30-minute drive South along the coast from Lahinch will take you to the stunning Trump International Golf Links & Hotel Doonbeg. This luxurious retreat is also one of Ireland’s premier golf destinations with an award-winning course on site and is in easy reach of other major courses on the Southwestern coast of Ireland. Outside of this the all-suite hotel is known for its picturesque setting, private beach and comfortably opulent accommodations, not to mention the warm Irish hospitality that pours from every staff member.

Time to cross the water, our first iconic golf course on the Island of Britain is actually a pair! The Old and New courses at Sunningdale Golf Club just Southwest of London, have been described as the finest 36 holes of golf in the British Isles. While both courses are stunning, they play very differently, the Old Course is known for its many large trees and heather growths, while the new is much more open and is great for driving. Both courses have played host to many major tournaments and the Old Course even appeared in an Agatha Christie novel!

The charming yet chic Coworth Park is a beautiful manor house set in 240 acres of scenic parkland only minutes from the courses. This small 5-star hotel is truly known for its equestrian program which is understandable with the Royal Ascot races taking place just up the road, but avid golfers will find the accommodations and amenities just as comforting. If you’re looking for some time in the city, central London is only 40 minutes away and has some of our favorite hotels in the world including Rosewood London, The Langham, Hotel Café Royal and The Savoy, just to name a few.

No list of golf destinations in the British Isles (or even in the world) can be complete without a mention of “The Home of Golf”, St. Andrews. This world-famous links course, one of the oldest in the world, has hosted more British Opens than any other course, and is home to the most famous hole in golf, the “Road Hole” or 17th. With the immense impact that this course has had on the game of golf and the long history of the course, this is definitely one course that every true golfer should play.

Located adjacent to the famed “Road Hole” on the Old Course, the Old Course Hotel has a spectacular view of the course and coastline. This five-star resort is a “bucket list” item for many golfers and is filled with great rooms, delicious dining and staff that exude Scottish warmth. A bit further up the coast, the Fairmont St. Andrews is a wonderful option for those golfers who are bringing the family along on their trip. Set on 520 acres atop the cliffs overlooking St. Andrews, this elegant resort offers spacious rooms, a great spa to work the kinks out after a round of golf and even a kid’s club with fun activities to keep the little ones occupied while you tee off.

Ready to play a round on these courses yourself and need some help getting the best tee times? Not sure how to make the logistics work for a trip to your own “bucket list” courses? Our team of knowledgeable travel advisors can help – there’s a reason we’re known as the top travel agency in Houston! Contact us or make an appointment with our team to get started on your dream golf getaway. 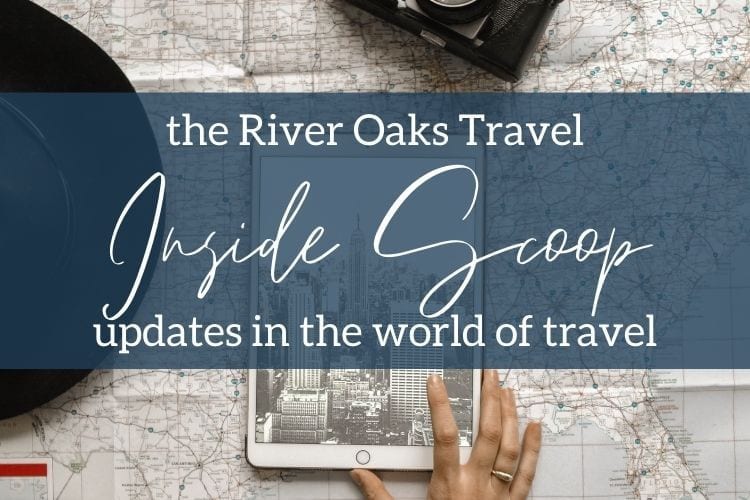 The Inside Scoop: Updates in the World of Travel 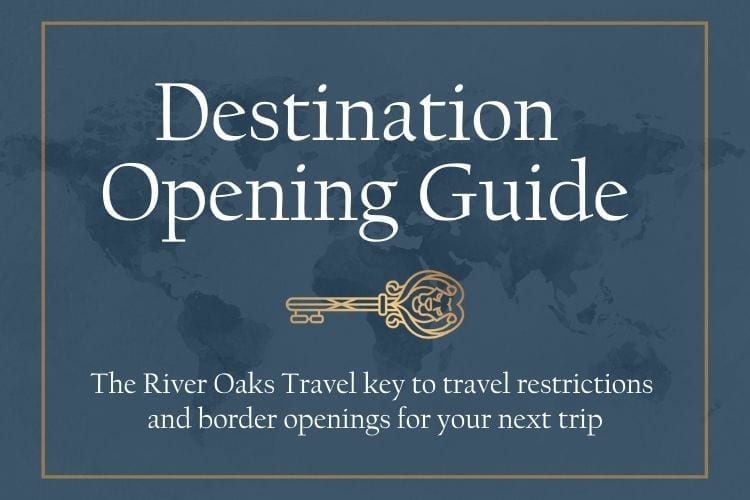 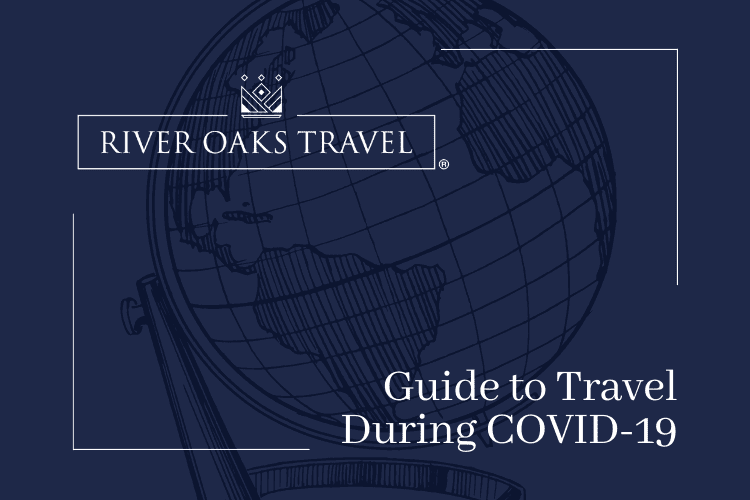 Guide to Travel During COVID-19